The good, the bad, and the edited program we’re going to follow

Eugene and I decided to jump into the Whole30 last Sunday. The Whole30 is month-long, clean-eating program that claims to ‘change your life.’ Added sugars, alcohol, grains, legumes and dairy are all off-limits. Instead, you’re encouraged to load your plate with veggies, fruit, meat, eggs and healthy fats from oils, nuts and seeds.

Things started off great. We meal planned, grocery shopped, and bought all sorts of fancy things like coconut aminos and coriander seeds. We discovered some downright delicious recipes, like these Bora Bora Fireballs. And we learned about the surprising foods that hide sugar — if you find bacon that hasn’t been cured in something sweet, please tell me about it!

We also learned  that those bad-for-you foods bring us a whole lot of joy, and that our social lives revolve around greasy grub and banned beverages.

Here’s how things went down

Breakfast: I started the morning with a blueberry, strawberry, spinach and chia seed smoothie. Nothing unusual here, except that I normally add greek yogurt and a splash of apple juice to my morning drink. Turns out neither of those additives are needed to hide the taste of spinach. Win!

Lunch: We were short on time before Eugene had to take off for work, so I cooked up these super tasty chicken and apple sausages and boiled some potatoes.

Dinner: We wrapped up day 1 with Paleo Pad Thai. Prior to this, we’d only used spaghetti squash in Italian dishes. This asian version of the noodle-like veggie was a definite win, and something we’ll add to our dinner rotation. 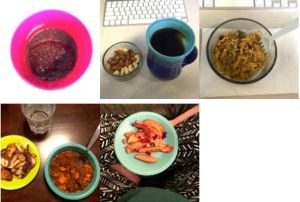 Breakfast: Another morning, another smoothie. The Whole30 is full of seemingly silly rules and recommendations. For instance: the people behind the Whole30 say that it’s better to chew your food than drink it because of satiety. They also say that you ingest more sugar from the fruit while drinking it than you would while eating it. Whatever. Rules were meant to be broken, right? Smoothies work for me, especially if I didn’t meal prep my breakfast, because I was too busy prepping my other meals.

Snack: Am I snacking because I drank my breakfast? Who knows. But I needed some raw nuts and black coffee to hold me over until lunch.

Lunch: Leftovers are my favorite, and I was happy to see that the paleo pad thai from the night before held up nicely in the microwave.

Dinner: By the time dinner hit, I was starving and my food cravings were through the roof. I wanted chips and crackers more than I’d ever wanted them before. I think it was one of those ‘you can’t have this, so you want it more,’ moments. To quiet my cravings, I sliced up a potato and baked it with some olive oil, salt and pepper. The baked chips were the perfect tool for scooping up the tasty chipotle, chocolate, sweet potato chili that I’d cooked in the crockpot the night before.

“Dessert”: One habit I was hoping to break through this program was my need for something sweet after dinner. Day 2 was not the day to break that need. Lucky for me, the Well Fed cookbook that my boss lent me has a handful of fruit-based desserts. I chose to try the fried apples with bacon and pecans. It was ok. Not something I would really consider a desert, though. Ice cream would have been better. 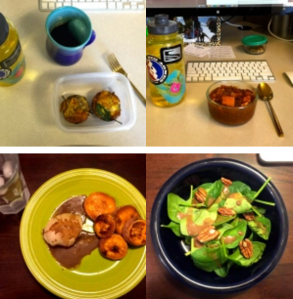 Breakfast: I decided to follow the rules today and I brought two hash brown, spinach and bacon “mini quiches” that I made the night before. I’m still not entirely sure if the bacon used was Whole30 compliant. As I mentioned earlier, pre-packaged bacon that doesn’t list sugar as an ingredient is non-existent in Rapid City, South Dakota. So I sucked it up, became was one of those shoppers at Safeway, and asked the butcher if he could check the ingredients to see if the butcher shop bacon contained sugar. He said no. I chose blind trust and bought the bacon.

Lunch: Like I said on day 2, leftovers are my fav. And leftover chili is the best.

Dinner: Here’s a funny story. Dinner was supposed to be ‘The Best Chicken You Will Ever Eat. Ever‘ from the Well Fed cookbook. (Side note: every recipe we made from this cookbook was outstanding. You should check it out!) The recipe was pretty involved for a chicken breast. You had to brine the meat — something I’ve never done before — and mix up your own spice blend. Because Eugene and I both work full time jobs, we decided to split up the steps. I brined the chicken the night before, and Eugene was to apply the homemade spice rub and pan-fry the meat. Unfortunately, he transferred the brined chicken straight to a baking dish and popped it in the oven. Truth be told, brining meat makes a huge difference and these chicken breasts were tasty! But now I’m even more curious to see what the original recipe tastes like. I roasted some sliced sweet potatoes as a side dish and whipped up a compliant sauce using almond butter, balsamic vinegar, coconut aminos and spices. And, instead of dessert, I opted for a spinach salad after dinner. Who am I?

Breakfast: Broke the rules for a third time and made a smoothie for breakfast. Partly because Eugene ate the remaining eight quiches, and partly because I enjoy smoothies.

Lunch: Leftovers from dinner. Do you see a trend in my lunches?

Dinner: You guys. I don’t know if it’s because I had deprived my body of sugar and grains for four days, but this meal left me feeling buzzed. Seriously. It was that good. I made pork, pineapple and jalapeño meatballs rolled in toasted unsweetened coconut. The Well Fed cookbook calls them Bora Bora Fire Balls. I call them ridiculously tasty crack balls. I roasted some brussels sprouts with balsamic and garlic. Because of course my favorite veggie should accompany my new favorite meatball. And with that, I think I just discovered my new favorite dinner.

Dinner: OMG. So much new! Pecan crusted chicken and mashed cauliflower. Yes, you read that right. Cauliflower. I’ve been wanting to try this forever, but I’m stupid picky and the thought of cauliflower “potatoes” scared me. But I pushed fear aside and ran ahead with Well Fed’s mashed cauliflower recipe. Unfortunately, Eugene was working nights this week, so I had to be the brave one and take the first bite, and OMG was I surprised. This stuff tastes just like potatoes. It will take a bit to get used to the idea of mashed cauliflower, but I plan to repeat this recipe often. The chicken, which was not from the Well Fed cookbook (go figure), was only so-so. 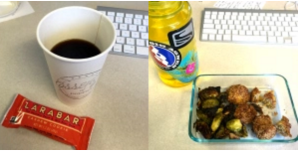 Breakfast: My coworkers and I have a Friday tradition. We walk to the local coffee shop down the street and get breakfast to-go. I stood in line drooling over huge, fresh-baked muffins, and frosting laden pumpkin bars. Normally I order a latte, but with dairy off the table, I opted for a black coffee. I took it back to my desk and had a Larabar to fill the muffin void.

Lunch: More fire balls and brussels sprouts! You can get a lot of mileage out of a pound of pork.

Dinner: Things started going downhill when I had this conversation with Eugene in the afternoon… 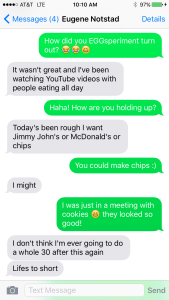 By the time I got home, he’d pretty much made his mind up that the Whole30 would be the Whole5-and-a-half for him. He was starving and his food cravings were out of control. I had kind of had enough, too. The thought of spending our Friday night at the grocery store was way less appealing than the counter-offer we’d received to grab dinner and hit up a comedy show with friends. We decided that we’d learned enough in our 5.5 days and that we could proceed with the program in our own way.

I feel a little bit like a failure, but I also had a great — food and beer-filled weekend, so that helps.

While 30 days without sugar, grains and alcohol was too much for Eugene and I to take on at this point in our life, we do plan to live the Whole30 lifestyle Monday-Thursday. In the few days that we’d been eating this way, we both felt a whole lot better and our clothes were fitting a whole lot looser. We also consumed way more veggies than we normally do. And it was pretty eye-opening to see how much sugar we consume every day. But we still want to enjoy a pizza and some beer every now and again, so we’ll just save that for the weekends.

Maybe someday we’ll find the motivation to try the Whole30 again. But for now, we’ll live our lives as healthy as we can, with a few indulgences along the way.

Have you tried the Whole30?

Did you successfully complete the program? Tell me how it went in the comments below.