I’ve never been one to make a tangible resolution. Every year I devise some abstract idea that I hope will carry me through the proceeding 365 days. Last year, I resolved to not let fear hold me back. While New Year’s Resolutions can be tough to stick to, I think I succeeded in my 2013 vow. 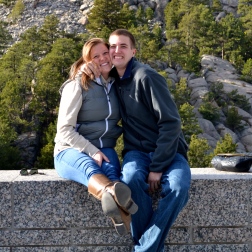 One year later, I’m crazy in love with Eugene. And though this seems petty to some, if you’re anything like me, you’ve been fiercely independent for 23 years. Independent people do not want to put their trust in someone else. Love is scary. Vulnerability is scary. Avicii says it best, “Life’s a game made for everyone and love is the prize.” Once you push fear aside, that prize is pretty great.

One year later, I moved 11 hours away from the most amazing family, and very best friends a girl could ask for. When you grow up on the east side of Madison, attend the same high school as your parents, and call the same people your best friends for more than a decade, “hard” doesn’t even begin to describe what it’s like to leave. I once asked my mom why she never moved and her simple response was, ‘I was too scared to leave.’ She isn’t alone in that. I was scared to leave and I’m still scared to be away, but there’s something so liberating that comes from being in a place where you know no one– however difficult that may be.

One year later, I’ve successfully thrown myself into the freelance writing world. It’s one thing to produce stories for a magazine when you’re interning and working at said magazine. It’s especially easy if you’re working under two smart, amazing and mentoring editors. It’s a whole other ballgame when you’re representing yourself. The first freelance story I submitted this summer was proofread no less than 42 times by myself and whomever else I could convince to look it over. I may or may not have closed my eyes, held my breath, and hoped for the best when I sent that first email. Now in South Dakota, I’ve hooked up with a cool statewide magazine and I’m producing freelance stories on a monthly basis. I’m reminded how willing people are to share their stories and so happy to have my writing accepted.

One year later, I’m constantly reliving a few awesome vacations. 2013 was the year I stopped worrying about saving for the future and started spending my money on fun things. Once funds had been allocated to those things we have to pay for, I booked plane tickets to Seattle, San Antoni0 and Boston. Money can be a really scary thing, but I’d rather be rich in memories than cash.

One year later, I’ve thrown myself into a host of new, and sometimes uncomfortable, situations and I’ve led a more fulfilling year because of it.

“Most people are paralyzed by fear. Overcome it and you take charge of your life and your world.” – Mark Victor Hansen

In 2014, I will continue to work on not letting fear hold me back, but I also  resolve to welcome every invitation and opportunity that comes my way with open arms (think Yes Man, but with a better outcome). I also resolve to make this the year I put my writing out there more than ever– that means submitting my work to more publications and posting more on kelseybewick.com.

Hold on everyone, 2014 is going to be the best year yet, I can feel it. And sticking with my own advice: I’m not scared; I’m excited for what my future holds.